Carillion Morgan Sindall has now successfully completed the great crested newts (GCN) mitigation for the A6 to Manchester Airport Relief Road which has seen over 1,800 GCN trapped within the route corridor and relocated to receptor habitats.

As a European Protect Species, works cannot take place in areas where GCN are present so this is a key milestone of the project, allowing construction to progress across the site.

The GCN mitigation was a significant undertaking, requiring the installation 36 kilometres of GCN fencing, intended, firstly, to allow all the GCN within the site to be trapped and then, once removed, prevent the newts from re-entering. GCN trapping can only take place when the GCN are out of hibernation during the spring and summer so the construction works have had to be programmed accordingly.

All GCN trapped from the site have been carefully translocated (moved) to replacement habitats. As part of the scheme, 10 new terrestrial habitats within specific Habitat Creation Areas and 21 new ponds specifically designed for GCN will be provided (replacing 10 ponds lost and one pond partially lost during the works). CMS has worked carefully to minimise the impact of the works on ponds and has managed to retain two ponds that were to be lost and one pond that was to be partially lost as result of the scheme.

The completion of the GCN mitigation is the culmination of a number of years of planning, which has included surveying 120 ponds in the vicinity of the scheme for the presence of GCN. A total 44 ponds within the scheme corridor were identified to have populations of GCN.

Over 8,200 ecologist hours were spent trapping out the GCN on the site, in what was the largest and most complex GCN mitigation strategy of its kind at this time in the UK. 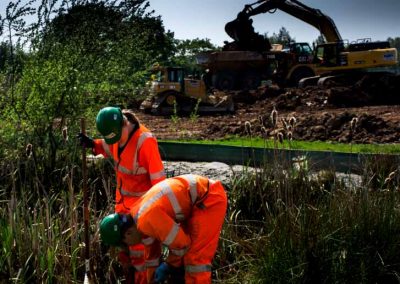 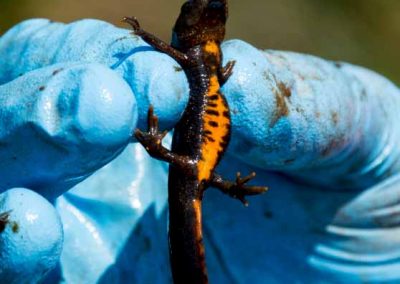